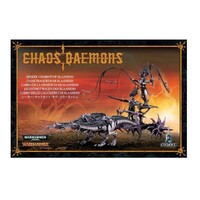 Seeker Chariots are not subtle creations. As the straining steeds pull the Seeker Chariot to full speed, swirling shapes sear the air with blinding streaks of the most vibrant and luxurious colours. The metal axles screech in disharmony akin to the wailing of tormented souls, a terrible cacophony that ululates between the chanting of the Daemonettes and the lilting hoots of the Steeds.

The Dark Prince of Chaos prides himself on the splendour of his decadent realm. Alas, the constant warfare that defines the Realm of Chaos has ever worked against Slaanesh's pursuit of perfection by leaving corpses littering his lands. Thus the Hellflayers ride across the plains, their blades cutting and slicing flesh into small pieces to be devoured by the otherworldly flora.

Both the Seeker Chariot of Slaanesh and the Hellflayer of Slaanesh are brutal, barbed creations that only the most wicked minds could have created. They are a mixture of eye-wateringly sickening spokes, claws, threshing blades and hooked whips. Garbed in very little, the horned or blade-armed Daemonettes stand atop the Chariot, or on top of their great steeds. The heads of the beast that pull the Slaanesh Chariot and Hellflayer are armoured and horned, and their vicious tongues are extended. They come with a mixture of textures from a toughened under-hide, scaled top, and a thick line of hair that follows the spine. No matter which of the models you choose to make, it is a remarkably versatile kit, with a phenomenal array of components as well as extras including heads and riders. 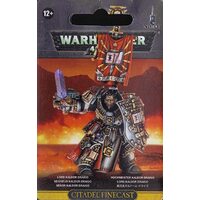